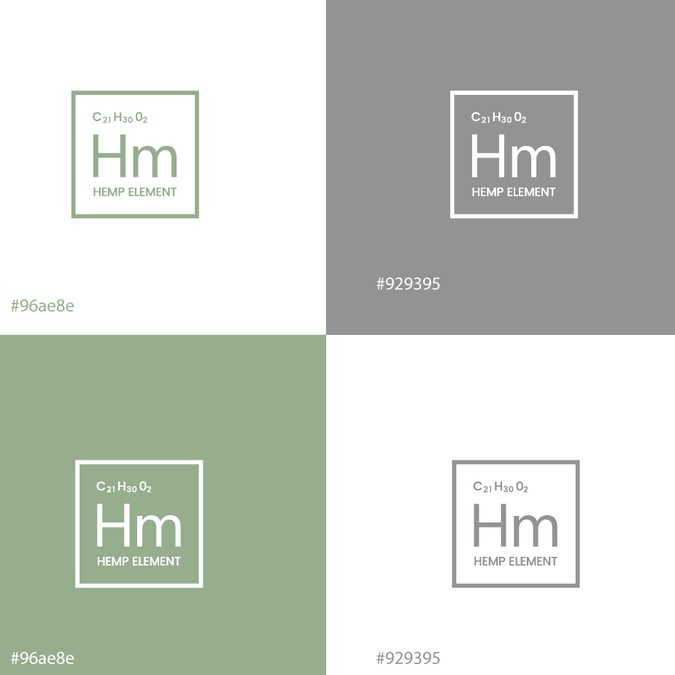 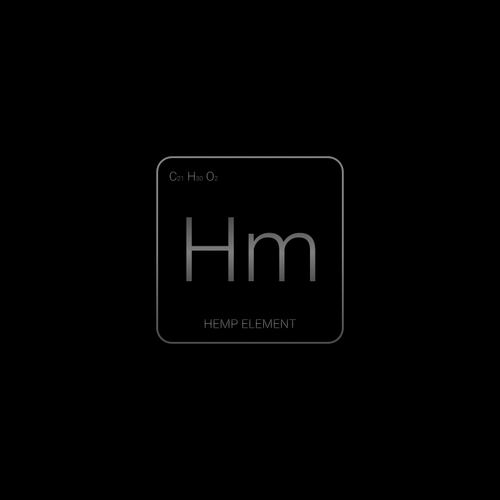 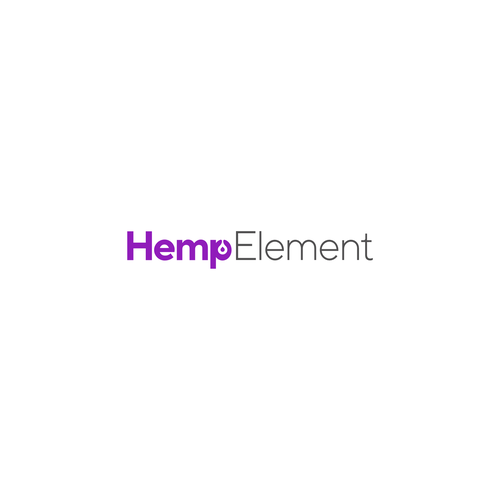 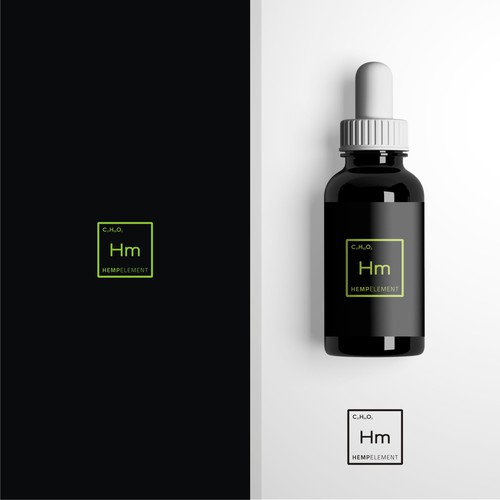 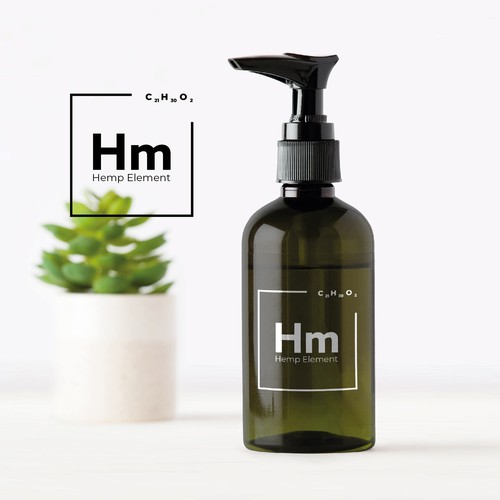 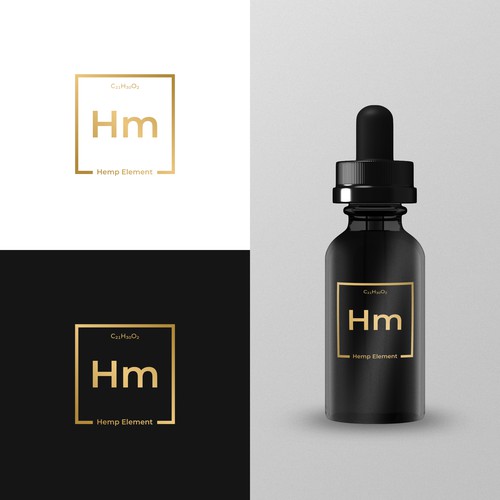 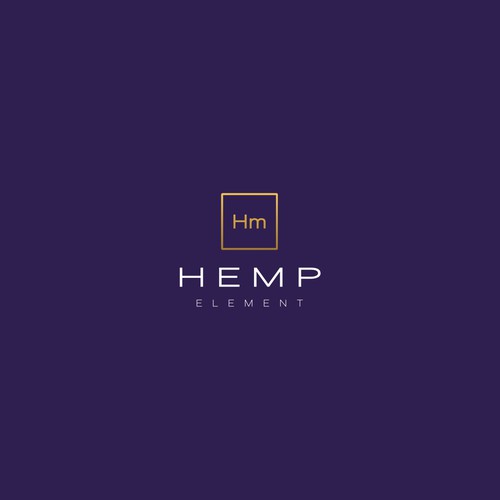 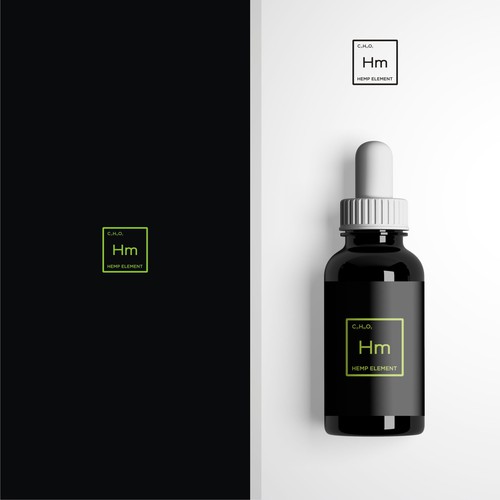 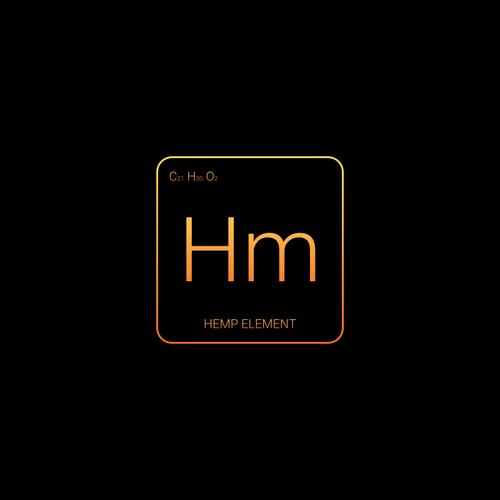 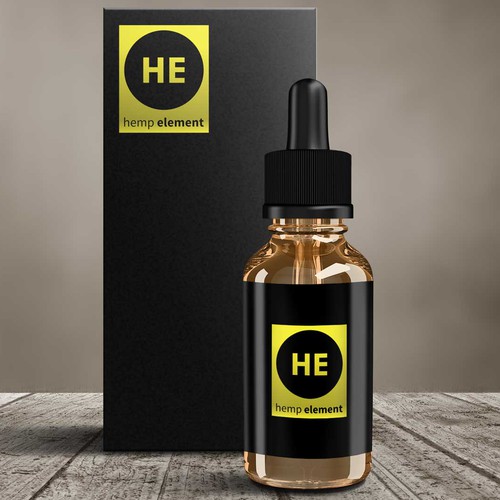 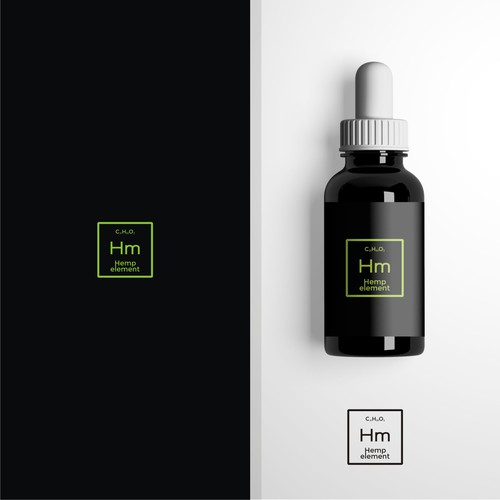 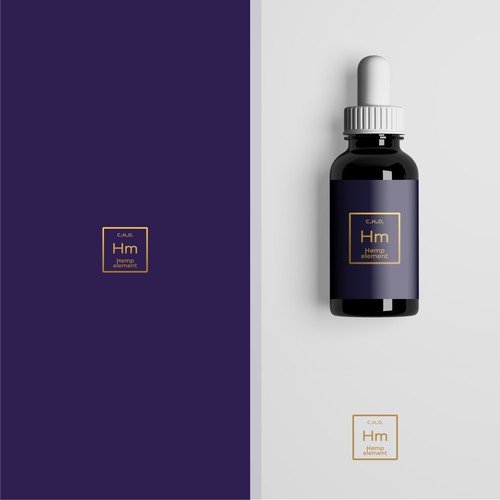 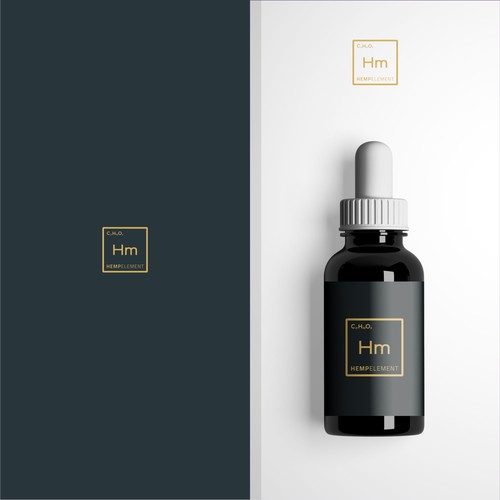 Product: A line of researched backed hemp products to support a healthy lifestyle. This line is 100% backed by science and only sources the highest quality of hemp derived CBD Oil from industrialized hemp.

Target Audience: 30-50 year olds (primarily Female) who experience joint pain, high levels of stress and have trouble sleeping and are tired of trying bs products. These people have tried so many cbd products only to find that most of them contained ingredients that were not listed on the label. With so many cbd products on the market, consumers want to trust a product is safe for them. This line is 100% backed by science and and the brand will be a trusted brand backed by research.

I accidentally used a capital "M" in "HM" this was a mistake. To play more into the theme of an element it should be a lowercase "m" for the logo, so: "Hm"
As an alternative "He" could be used to brand Hemp Element. But I'm afraid people will equate that to the element of "Helium."

NEW UPDATE 3/21/20: Please use solid colors. No gradient style. Simple is the most important. :) I also changed the color for blues to greens. An idea I had is black and green colors. Or neutrals and green colors. Simple. Luxury. Science.

NEW UPDATE 3/21/20 1:00am local time
Could I see some designs with the following:
-Theme - periodic table
-Box, with HM as the symbol
-Above and below "HM" (inside box) "HEMP" "ELEMENT" respectively.
-Directly underneath HM and above "ELEMENT" is the molecular formula: C21H30O2
-A second version could be where "HEMP" "ELEMENT" are outside box.

-Another version would be to have the words "HEMP ELEMENT" be more a part of the symbol. Similar to how the cv science logo is where the "V" is "holding" the "C"

I’m mostly interested in combination and emblem logos, but I’m open to all ideas.

Since the name is HEMP ELEMENT - an idea that I had was to incorporate a periodic table of elements theme. One idea that I had would be to have HM be the element abbreviation and the logo would incorporate the "square" around the HM "element." Just to play along with the theme of "elements."
https://en.wikipedia.org/wiki/Periodic_table
But I'm open to all ideas.
Above all I want the logo to be simple, easy to read, and easy enough a customer could draw the logo.
Thanks!
Micah

E-commerce Brand - Powerful, Interesting, World Problem Solving Products
299 $US
Rex Rabbit brand will be a creative, useful and quality brand name for households products, kitchen & dining products, s
137
entries
42
designer graphistes
Grocery Delivery App Logo design
US$ 299
We offer a platform for grocery shops (including supermarket and Hypermarket) to offer their goods in our platform and A
84
entries
30
diseñadores
Logo Design for New Venture-Backed Startup (Atomic)
299 USD
Atomic Returns is B2B software that empowers retailers to manage and optimize their online returns and return policies.
69
entries
16
designer
Packaging Design for Flatware Products
449 $US
Target customers would be female and young/medium aged demographic globally.
4
entries
1
graphiste
Looking for a sophisticated modern logo that will make my brand stand out
US$299
We are an inspirational apparel brand that also focuses on bringing awareness to mental health issues .
25
entries
12
diseñadores
USAMM Covers
899 $US
We're a military uniform company that is retooling our factory to produce face coverings. Our design will be more of a
36
entries
12
designer graphistes