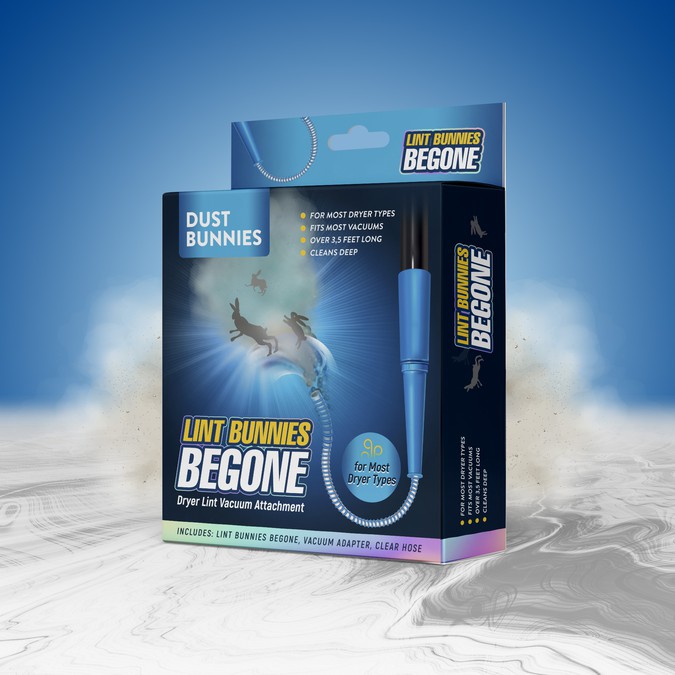 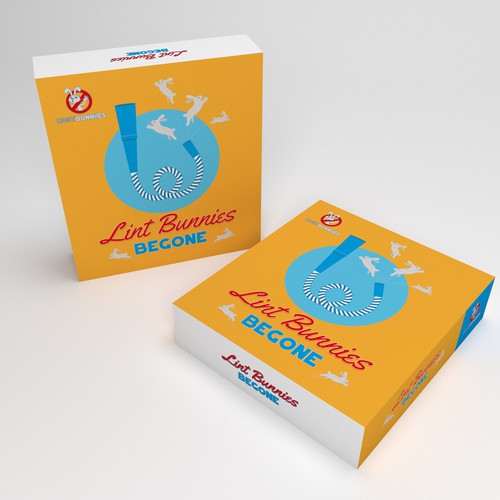 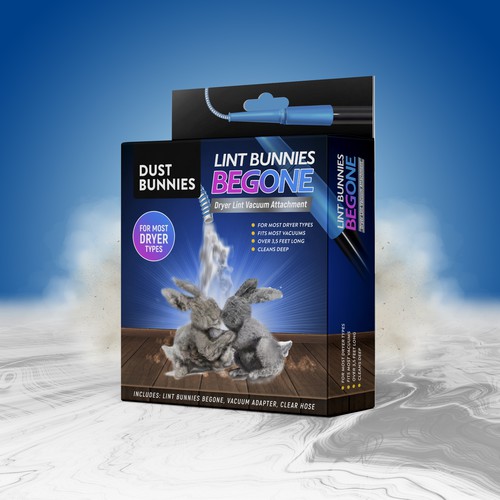 People who are into preventative maintenance on their home's appliances. It keeps dryers working efficiently and prevents vent fires.

I attached a competitor's product packaging. I'd like to include as much of the competitor's info without copying exactly what they have.

Logo (lint bunnies running away from vac and disintegrating, see Reynaldo's drawing attached). The logo is getting finalized, and we will upload final logo files shortly! For now, you can just the placeholder drawing.

I like the idea that the lint bunnies are trying to escape the suction of the vacuum in the drawing which i'd somehow like to incorporate the idea into your version of the drawing...but i do NOT like that the hose looks like intestines which is why I attached a pic of the actual product. There are several pics online of comical bunnies made out of lint. They're either in cartoon form as a dust bunny or actual formations of bunnies made out of lint. Please always refer to them as "lint bunnies" and never "dust bunnies".

FNSKU Barcode on bottom of packaging. I will get this barcode to you as soon as I receive it from Amazon which will be about 72 hours. - Amazon barcode. Has to be on a white background on package so it can be scanned.

I attached a copy of my competitors Instructions which does not have to be on the box but I included it for your reference.

Made in China definitely needs to be on the box.

I don't want to use the word "buildup". It seems like the people complaining online about this product complain that it removes lint but isn't strong enough to remove buildup.
The competitor's packaging is bland to me. I like more vibrant color, not so muted.

Cardboard product box's dimensions are 23 * 25.5 * 6 cm. I'm not sure what this equates to in inches. The mfgr in China gave me dimensions in centimeters. See first attachment of competitor's box. It has lines of some sorts. I'm sorry I'm not more helpful.

Create a beautiful label for a range of organic supplements
US$ 449
Probably adults 24 and up...middle class and up who are health-conscious and looking to purchase high-quality products.
83
entries
14
designers
Food Huggers XS Lid Packaging
EUR 409
Eco-friendly consumers who are reducing their carbon footprint and use of plastics.
21
entries
3
diseñadores
Help The Good Wizard's Granola Bedazzle
749 $US
Our customers are keto / low carb practioners that are sick of eating cardboard tasting artifical foods, care about qual
101
entries
14
designer graphistes
exclusive Box design for neck pillow set, to sell in airport shops
€409
airline passengers in flight
101
entries
22
デザイナー数
Eye Catching Packaging for Thermal Coffee Dispenser
$449
large families or anyone who works at a small office or business. this is great for offices, boardrooms, cafeterias, con
64
entries
15
diseñadores
Stylish Indian/Pakistan food packaging
1.099 €
Indian/Pakistani in germany, danmark, netherlands. Distributed in supermarket to private consumer and small restaurants.
262
entries
15
Designer