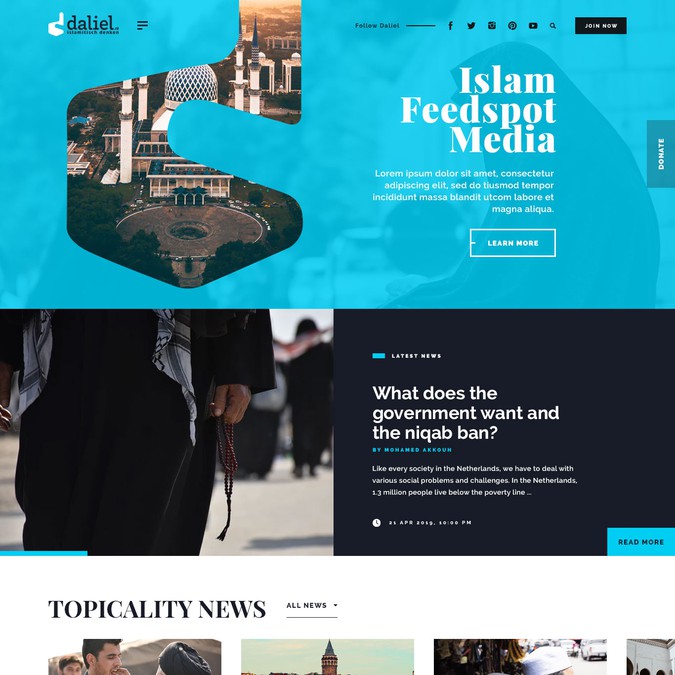 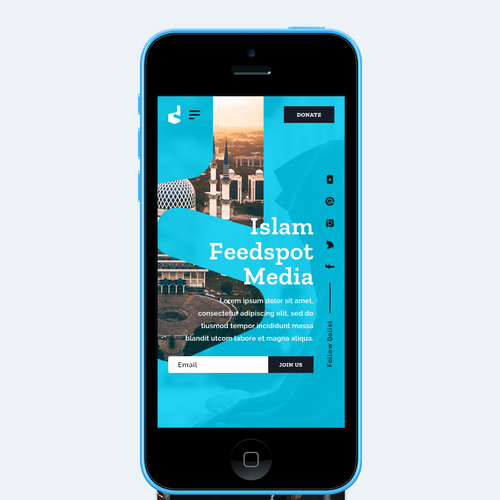 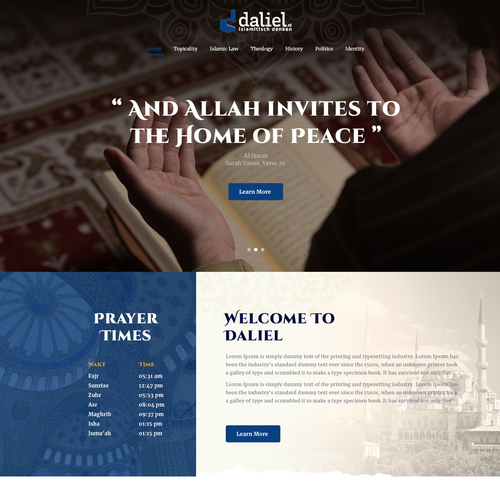 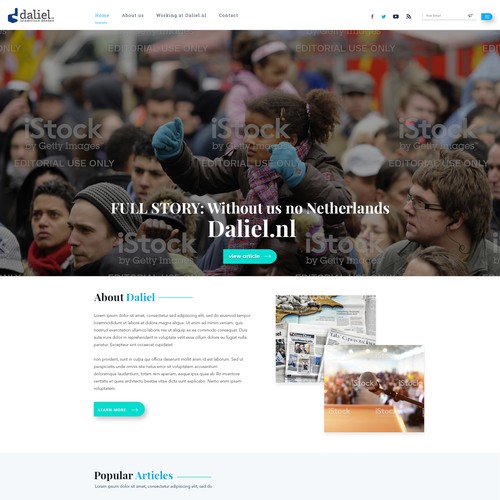 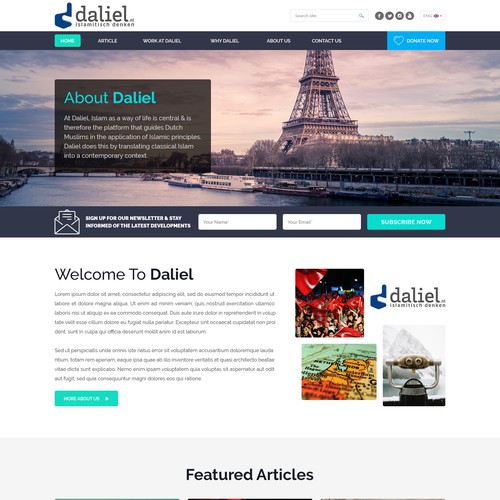 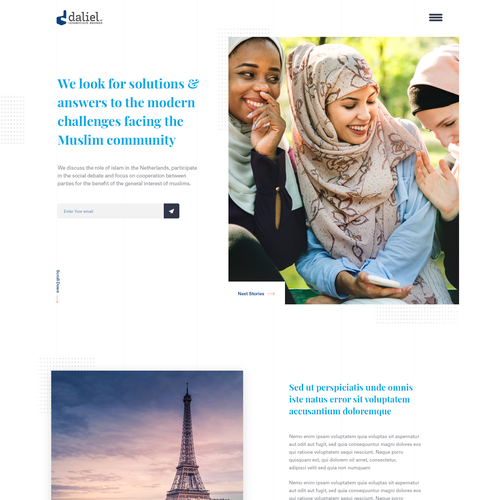 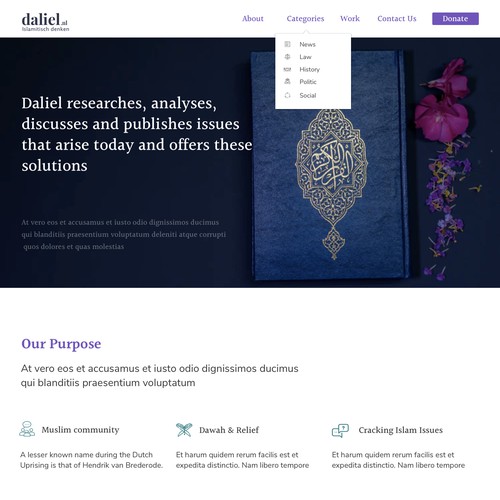 At Daliel, Islam as a way of life is central and is therefore the platform that guides Dutch Muslims in the application of Islamic principles. Daliel does this by translating classical Islam into a contemporary context.

Muslims in the Netherlands (and the West in general) have historically found themselves in a unique situation. Never before in history has such a large group of Muslims lived under a non-Islamic authority on a permanent basis, in the sense that the vast majority of them expect to grow old here and produce new generations, without going back to their 'own country'. The muslims in the Netherlands are an inseparable part of Dutch society.

However, there is no central religious authority in the Netherlands that protects the specific religious rights of muslims and represents the interests of this group. This means that the muslims have to do this themselves, especially in the present era in which these rights are gradually being restricted. Daliel exists to help Muslims do that.

On the basis of various expertises, thorough and scientifically sound studies, we look for solutions and answers to the modern challenges facing the Muslim community today. We discuss the role of islam in the Netherlands, participate in the social debate and focus on cooperation between parties for the benefit of the general interest of muslims. Daliel researches, analyses, discusses and publishes issues that arise today and offers these solutions through various channels and media to the community.

1st page: Homepage
Please refer to old website (daliel.nl)
1. Needs to have some info about Daliel as an organisation
2. Highly converting homepage on the 1st section (gather e-mail address for newsletters)
3. Learn more about Daliel on 1st section of the homepage
4. Articles on different categories: legal, politics, society, etc.
5. Work at Daliel.nl
6. Newsletter sign-up on the bttom
7. Donate now + menu
8. Why Daliel (3 parts with icons) + menu
9. About us in the bottom/footer + menu
10. Contact us (bottom/footer) + menu

Use breathtaking wedding images to design the Wish Upon a Wedding charity site
1.049 US$
Our website has four purposes: 1.) to provide information about the organization 2.) to accept applications from c...
167
entries
21
diseñadores
Create a Winner Website for a National Brand
599 US$
Create a striking, bold website for a national brand!!!
82
entries
14
diseñadores
Home Page Redesign.
USD 599
We are a referral and placement agency assisting Seniors and Family members to find Assisted and Senior Living facili...
54
entries
30
designer
HELP US CREATE A FANTASTIC WEBSITE FOR ADDICTIONS AND MENTAL HEALTH
749 $CA
We provide integrated mental health and addictions services to the community of Lanark, Leeds and Grenville....
35
entries
11
designer graphistes
Are you Awesome? Show us! Home Page + Winner becomes our inhouse designer!
US$ 1.430
Watch this video! I describe what we are looking! https://www.youtube.com/watch?v=LSLbIh1cPBM What does Earthplac...
133
entries
49
designers
Josaab Foundation New Website
$1,049
A- About Josaab Josaab Foundation is unique and the first organization providing hospice services (mobile and stati...
128
entries
32
diseñadores

Comienza ahora
Redesign the Internet Archive's Wayback Machine
599 $
We are a non-profit digital library. Among other things we operate the Wayback Machine, an Archive for the Web....
38
entries
14
Designer
Change the World Through Higher Consciousness
US$ 1.199
What is the Institute for Hermetic Philosophy? We are a worldwide community of people who are dedicated to living ...
55
entries
19
diseñadores
CARE...to change the world with us?
$599
WHO are we? We are two college students hoping to start a socially good commerce and we need your help! WHAT are we of
33
entries
8
diseñadores
Landing page for Naval Officers Database
4 878 DKK
The webpage is a landing page that links into a webpage that is able to search a database holding historic naval officer
66
entries
17
designer graphistes
Peregrine Global Foundation needs an awesome new website!
US$ 599
In 2018 the Peregrine Global Foundation was formed out of a vision by Dr. Olin Oedekoven and his wife, Laurel Vicklund.
48
entries
19
diseñadores
Hope Haven Kids Redesign
US$ 599
Hope Haven Kids is a non-profit organization to provides services to families of special needs children. These services
126
entries
46
designers
Más información sobre diseño de página web
Vea como funciona